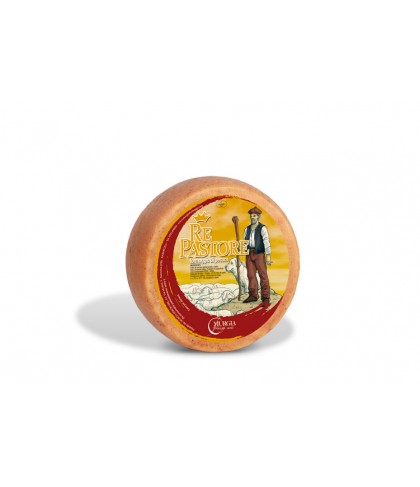 Semiagded Pecorino cheese with a strong flavor, has the smooth outer appearance, the straw yellow paste with small holes and a maturing not less than 90 days.

Semiagded Pecorino cheese with a strong flavor, has the smooth outer appearance, the straw yellow paste with small holes and a maturing not less than 90 days.

The birth of Cheese is intertwined with the origins of man and primitive societies. At a time when primitive man decided to devote himself permanently to agriculture, he learned to domesticate animals such as cattle, sheep and goat, useful, as well as for meat, for milk, a valuable food for his high nutritional qualities.
But producing the first cheese with the milk had to be something simple ... it was necessary a little 'ingenuity and, certainly, a little' distraction to get the milk no longer fresh or stored improperly, and then the curd cheese (never heard about the Sardinian cheese?) Unfortunately, the origin of the cheese is lost in legend, but we can always imagine ...

... A pastor a little 'distracted that he forgot to consume fresh milk and keep it in a cool place. With the heat, the milk is acidified and formed a nice curd. Or more likely, our pastor, wanting to bring a bit 'of supplies, in anticipation of a very long journey, put the milk in a bottle, usually a bottle, made from the stomach of a goat. The poor man, that there are not knew that the stomach of ruminants of enzymes that facilitate the digestion of milk, had to be very surprised, when he tried to drink and instead of fresh milk found himself drinking a yellowish liquid and acid, the curd precisely , from which it would have produced the cheese.
The MURGIA SERGIO SRL performs, with the help of suitable vehicles, the daily collection of milk from about 200 sheep and goat Campidano companies, the vast plain of Sardinia, located in the southwest portion of the island.

The cheeses have a very high nutritional value, so that can be defined as a real concentrated (to a greater or lesser density depending on the water content) of the nutritional quality of the milk (with the exception of lactose and a part of proteins remained in the serum).
If you add to this their favorable characteristics of shelf life, low in volume and easy to transport, completes the picture of an excellent food both in terms of taste standpoint of the nutritional qualities.

A food that is exceptionally suited to serve as a corrective of the deficiencies of certain diets or unbalanced and incomplete (as are, for example, the extreme vegetarian diets) and integrator, particularly in feeding children and the elderly.

Characteristics and Specificity
of sheep's milk
The sheep milk has specific differences compared to the bovine both from the physical-chemical point of view that microbiological. It appears to porcelain white color, clearer compared to that of cow for the minor presence of carotene, and with a higher viscosity due to the higher dry substance content.

The composition of the sheep milk is characterized by a remarkable compositional variability due:
• to genetic factors
• the stage of lactation
• feeding
• to farming conditions.
Is, however, a much higher fat content and protein than cow's milk, and it is in relation to these characteristics that the sheep's milk is normally used in the dairy industry.