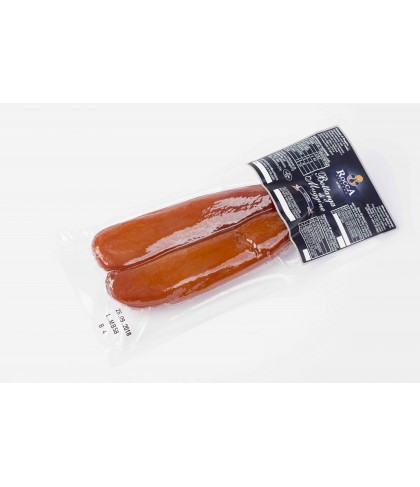 Bottarga has an intense flavor and bitter aftertaste, almost almond-like. It is particularly appreciated in cooking because it is able to flavor with little calories.

Mullet roe (Bottarga) made by Stefano Rocca in Cagliari, Sardinia

A bottarga of great personality and character, dark dry and grainy, has a nice clean aroma of "seasoned" sea, an intense and sweet flavor, with the saline note in evidence, but round and balanced with a complex aftertaste and a slightly bottom bitter and spicy.

The mullet bottarga (mugil cephalus) often referred to as Sardinian caviar is one of the island's products of greatest excellence. It is a very ancient food; evidence of its use has been found by the Phoenicians, then the Carthaginians and Romans. Until the 1970s, bottarga was an elite food, reserved for professionals and known mostly locally, today you will find it easily in the best shops and supermarkets.

The bottarga in the form of whole "baffles" is more valuable, and consists of intact ovarian sacs, which are extracted, salted and exposed to the air for seasoning. The less seasoned "baffes" have a color that tends to deep orange, while with the aging process they take on an increasingly brown color, compacting and becoming even tastier.

A typical history of the Italian province. It began almost a century ago when Stefano Rocca, grandfather of the homonymous and current owner of the company, began to produce the first mullet roe, at the Cooperative of the Fishermen of the IV Regia of the Santa Gilla pond in Cagliari.